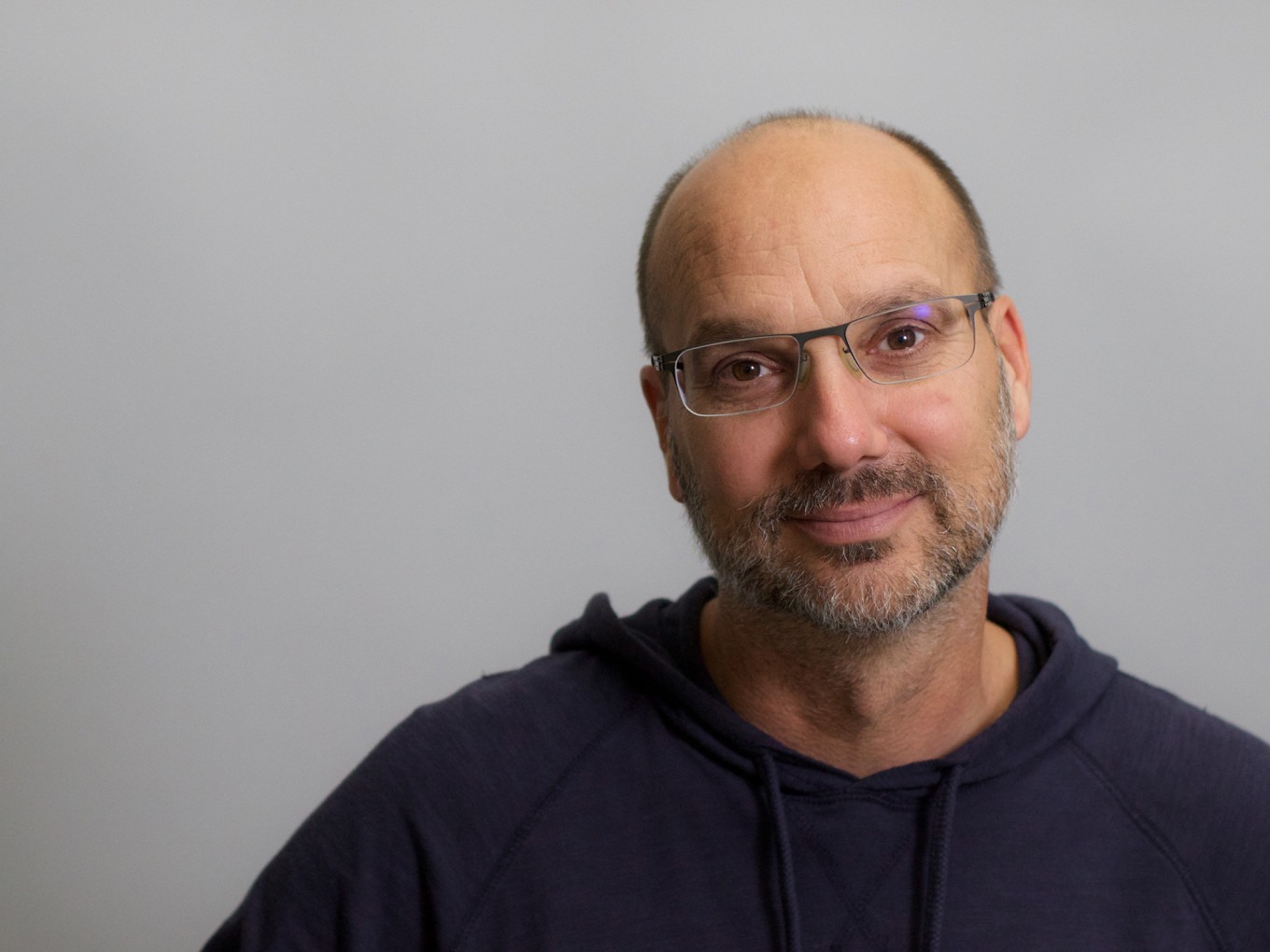 The people who dared to change the mobile technology game had an impressive background. Apart from Rubin, the core team of the company included Rich Miner, Nick Sears and Chris White. Miner was one of the founders of the Wildfire Communications company that spurred the idea of voice user interfaces with its creation, SIRI. Nick Sears was the ’s product marketing and management and Chris White worked at Microsoft on the MSN TV (formerly known as WebTV) technology’s UI.

Rubin’s own career path seems rather paradoxical at times. He started out as a robot technician in a German industrial and consumer goods firm Zeiss AG and later moved to a similar Swiss company where, as Rubin himself says, he would have been perfectly content to work further. But his fate was determined by a girlfriend of a complete stranger.

Link between robot and human

In 1989, Rubin enjoyed a vacation on the Cayman Islands. Walking along a coastline, he stumbled upon a sleeping man whose name was Bill Caswell and who was an Apple employee. Caswell’s girlfriend threw him out of the cottage after they had a fight. Rubin was hospitable enough to invite the man to stay at his place; one good turn, and Andy works for his future rivals, in a company where he was dubbed «the Android» for his extraordinary passion for robotics.

People from Rubin’s close circle say that the word «robots» means «Andy Rubin», and «Andy Rubin» means «robots». Robots are an integral part of Rubin’s personality; they surround him at work and at home. Andy’s guests are welcomed by a retinal scanner that opens the door only to those present in his database. Others have to settle for the buzzer; press the button, and a mechanical arm will strike a bell in the foyer with a hammer. Why? Because Rubin can. Rubin has been fascinated with progressive technology since the earliest days of his life. His father used to sell electronic appliances, and some of them found their way into Andy’s room right after they were catalogued.

The engineer, the visionary, the hooligan

When Rubin worked at Apple, the company was at the peak of its success with its Macintosh II, and with Rubin’s involvement they created its replacement, the Quadra generation. The first attempts at creating a modem with software data coding and troubleshooting features were made as well. In 1990, Apple established the General Magic branch office where Rubin worked as an engineer from 1992 to 1995. General Magic brought forth the Magic Cap operating system for portable computers, but, unfortunately, it fell flat. According to one of Rubin’s colleagues, Magic Cap was way ahead of its time to be successful and attractive to the average user.

Rubin, obsessed with hardware like a true engineer, was somewhat of a dinosaur among the digital entrepreneurs of the Silicon Valley. Some of his shenanigans were absolutely brilliant, if annoying to his superiors; during his time as an engineer in Apple, Rubin reprogrammed the company’s internal phone line so that the incoming call to the IT department would apparently come from the executive director who offered the department’s employees special funding.

Some of these tricks could prove too costly for Rubin’s employers. When Rubin worked on MSN TV, he assembled a  robot with a microphone in its arm and let it aimlessly roam around the offices to eavesdrop and spy on the employees. The robot was fully online. When a group of hackers hijacked the computer that was controlling it, the only thing that saved Microsoft from an insider info leak was that the hackers had no idea that the robot could record video. The security department made Rubin put the robot away for good, and the engineer became a legend among his colleagues.

At the turn of the millennium, when others wore massive belt buckles with fake diamonds and precious metals, Google’s founders, Sergey Brin and Larry Page, attached a new gadget that looked like a bar of soap to their belts. The device had a sliding screen with a tiny keyboard, could go online, send instant messages and emails and had Google as its default search engine. It was almost like carrying a desktop on your belt. In 2002, everyone in the Silicon Valley elite owned it. It was called The Danger Hiptop, and it was the world’s first smartphone, developed by the Danger company led by Andy Rubin. Rubin took the name from , more precisely, from the «Lost in Space» TV show, where a certain character with crimped metal arms and a glass head warned others of threats by droning «Danger! Danger!» — indeed, it was a robot.

This was the turning point for Rubin that made him reassess his role in the project. He started to learn how to establish a business strategy and think like a manager. Later, Hiptop was released in association with and rebranded into Sidekick. This novelty product was also the first to employ the contract approach to sales, later adopted by Apple and AT&T.

In search of investors

In 2004, Danger’s board of directors started to look for a new chairman. Working in this company had already run its course for Rubin, so he left willingly. But he still dreamed of a  smartphone, and the active life phase of Rubin’s second company, Android, began. After searching for investors for a while, Rubin supposed that Samsung, the largest phone manufacturer at the time, might see the potential of his product. When his team arrived at the vendor’s office in Seoul, Rubin presented his idea to a couple dozen managers. His pitch was met with an icy silence, broken by a couple of rhetorical questions asked by one of the Samsung reps: could those eight people really hope to change the mobile device market and, more importantly, whether Rubin was high or what. This happened two weeks before Larry Page offered Rubin a place on the Google team along with the funds for his project. The acquisition happened in July 2005.

Open source above all

As Nick Sears, of Android, recollects, the four developers were devoted to the open platform philosophy for consumer products. Insiders from Google say that the following model was adopted from the start: the company hands the technology to cellphone manufacturers which will serve as an invitation to developers and content distributors to create everything they’d like for this platform, significantly accelerating the pace of the platform’s development. Note that this concept was invented at the time when Google was thought of (not in the least, due to Microsoft’s involvement) as a company that can only copycat ideas and not generate them.

Rubin retired from Google gradually. In March 2013, Larry Page gave a summary of the company’s achievements in the past years and the accomplishments of the former chief of the Android department in Google’s blog, and wished the best of luck working on the new unnamed Google project. Later it turned out that Rubin was preparing for a breakthrough in industrial robotics. In fact, his initiative reeled Boston Dynamics and Titan Aerospace right into Google’s ecosystem. In the end of October 2014, Rubin left Google completely — without any pressure from the company, solely because he wanted to move on.

Nowadays Rubin is the head of Playground Global, a business incubator for financial and technical support and consulting for startups, among which are companies like CastAR, an augmented reality glasses manufacturer, and MeetOwl, a videoconference system developer, and Subpac who make vests that emit low frequency music sounds right into the wearer’s body. In fact, Rubin demonstrated the last invention at the Bloomberg technology conference in June 2016. The Subpac backpack was priced at $300. The µAvionix drone transmitter that was supposed to be the foundation for a global drone tracking system was presented at the same conference. At Bloomberg, Rubin mentioned that the fund has gathered 15 companies and that its main interest is interaction between objects, data and the Internet. Rubin also alluded to a yet undisclosed quantum computing company.

In September 2016, Rubin said that a new dashcam was in the works. The device would be distributed through a unique business model in which the user gets the device for free but is obliged to share the data it collects. The media speculate that this would create visual street maps similar to Google Street View all around the world. International journalists note that this project may be a big hit in Russia where most drivers have a dashcam to help settle arguments related to road accidents.

Staffed with former Google, Apple and General Magic employees, Playground set out to become a centralized base for supplying software and hardware parts for technologies. The basic idea is similar to Android: the Studio is the central point of Playground that generates module components that other partners can easily integrate into their devices. According to an interview to Wired, Playground will be available not only to startups but to the general public as well. As far as hardware developers are concerned, it will be similar to the way unified Android can be installed on smartphones by any manufacturer, or the way Windows can be installed on every PC.

In November 2016, a plan to raise 500 million for Playground Ventures was revealed as part of a new round of funding, in addition to the 300 million already collected in 2015. By that time, one of Playground’s child projects, the deep learning specialized Nervana Systems, had already been bought out by Intel for $350 million.

However, the ghosts of smartphone past just wouldn’t let Rubin go — in January 2017, Bloomberg wrote that the founder of Android decided to introduce AI technologies into consumer electronics. The new company staffed with 40 employees was named Essential, and Rubin was appointed its CEO. A new «borderless» premium class smartphone was selected as its flagship gadget. This device is upgradeable «on the fly» with the help of  modules, and these modules can also be used as auxiliary power sources. Essential aims to support models from third party manufacturers, and its engineers are working on a new extension: a spherical camera capable of making 360 degrees panoramic shots in high resolution. The new gadget is priced similarly to the latest iPhone at $649 and is likely to be manufactured by a Chinese company called Foxconn.

The story of the brilliant native of India, who replaced Andy Rubin and headed for the development of AI

Today, the most popular platform on the planet run by a man who does not have even a technical education