Nine stories about the creators, managers, designers and investors of Android. 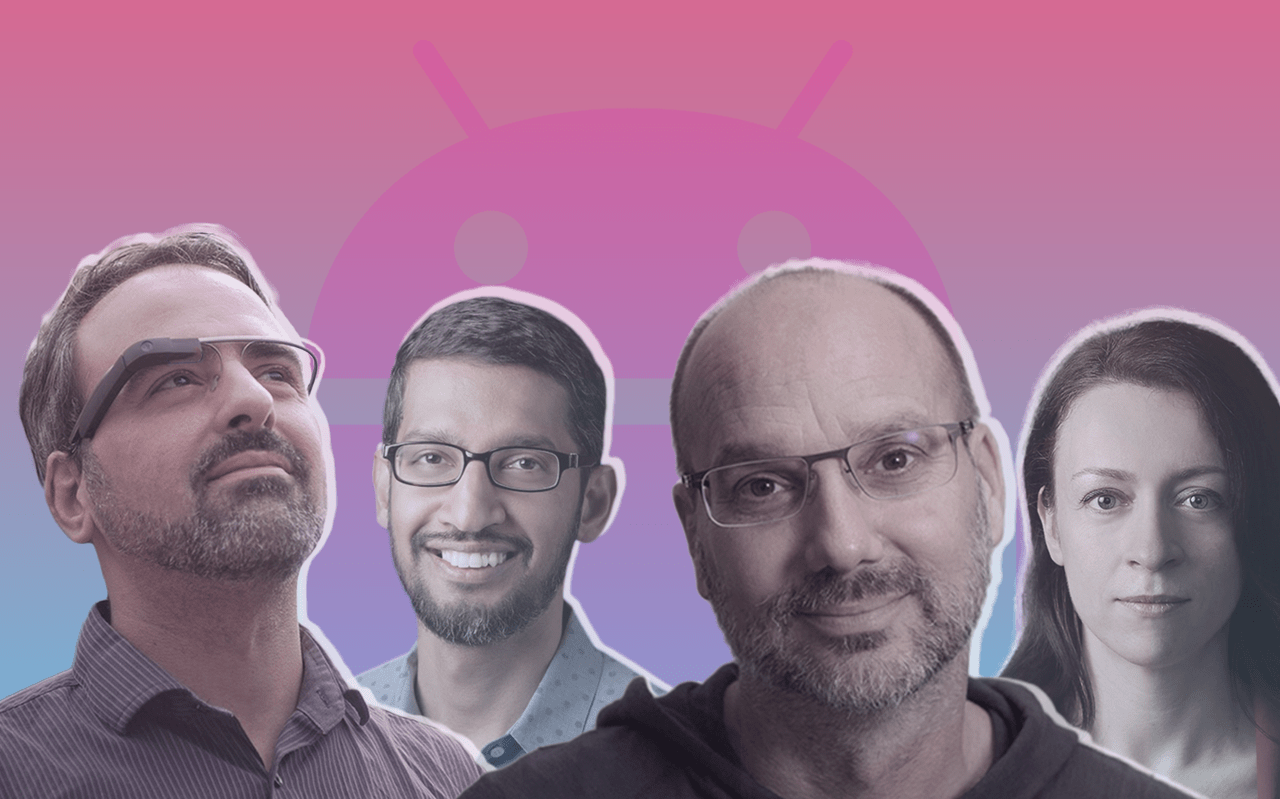 But it seems surprising that the owners of most devices from Nexus, Samsung, HTC, LG, Xiaomi, Huawei and ZTE are unfamiliar with the people whose product they use daily. This article is supposed to reveal who exactly the Android big wigs are, as they deserve recognition no less than Jobs, Wozniak, Cook or Ive.

Before becoming the founder of the most popular mobile platform on the planet, Andy Rubin has worked as an engineer in several companies. Among them is Apple, where Rubin received the nickname Android. The first Rubin’s success in the smartphone market is the creation of The Danger Hiptop, also known as Sidekick. This phone has subdued Sergey Brin and Larry Page so much that in 2005 they made Android a division of Google. When Rubin became tight in the growing enterprise, he resigned as Android`s CEO and founded a perspective business incubator Playground Global.

Read about Andy Rubin’s love for robots and in our blog.

The future CEO of Android and Google was born in the technological capital of India, the city of Chennai, in the family of General Electric`s electrical engineer and the stenographer. Since youth, Sundar invested all his time and effort into his studies, and after receiving a bachelor’s degree from the Indian Institute of Technology, he went to Stanford University in the USA, financially supported by his parents. In 2004, Sundar Pichai became vice president of product management at Google and launched Google Chrome, Chromebook, Chromecast and other popular Google products. In 2013 Pichai inherited from Rubin the post of chief executive of Android, and two years later became CEO of Google.

Read about the school years of Sundar Pichai and the successes in the field of AI in our blog.

At the age of 18, Lockheimer moved from Tokyo to Texas to study architecture, but programming became more interesting. In 2000, Rubin took Lockheimer to Danger, Inc., and in 2005 he became executive director and vice president of engineering at Android. Subsequently, he replaced Sundar Pichai as head of the platform. A very delicate and frank manager, Lockheimer is able to put his colleagues to his side, defuse the situation during business meetings and loved and trusted by everyone.

Read about the character of Hiroshi Lockheimer and rumors around the Andromeda project in our blog.

Hugo Barra was born in Brazil, where he received an education in electrical engineering, and then entered MIT, where he studied management, computer science and had practice in public speaking. In 2010, Barra was the face of the platform and introduced new versions and devices at various conferences when he became director of product management at Google. He did the same later in the Chinese company Xiaomi. Today, Barra is responsible for VR in Facebook.

Read about communication skills of Hugo Barra and his love affair with the manager of Google Glass in our blog.

Before making a revolution in UI/UX in Google and bringing the concept of design to the company, Matias was engaged in the development of computer games. During the boom, Duarte began to design interfaces for operating systems and mobile platforms. The first thing Duarte did in the position of vice president of design for Google is development of Honeycomb design. On Google I/O 2014, Duarte spoke about the Material Design concept inspired by a piece of paper. Google and Android have changed forever since then.

Read about the role of experience of game development in the profession of the designer and what inspires Matias Duarte to work in our blog.

Android might not be without that person. In addition to investment, Steve Perlman is known as an inventor who patented more than 150 developments. On his account — technology, player and framework named QuickTime, capture technologies MOVA and Contour Reality Capture which influenced the industry of games and cinematography and cloud server for gamers OnLive. In recent years, Perlman has been trying to change the scope of wireless communications. The technology named DIDO and the cellular network pCell developed by Artemis Networks built on DIDO basis should replace 4G LTE.

Read more about the innovations and visionary predictions of Steve Pearlman in our blog.

Kondik became famous by chance. Its firmware for the G1 phone was made for the sake of laughter, but collected a lot of positive feedbacks on the forum. People offered options for improvement, and the result of common efforts became known as CyanogenMod — an alternative to Android OS, which solved some technical problems of the platform. Kondik’s meeting with Kirt McMaster led to the founding of Cyanogen Inc., but the discord between partners at the end of 2016 led to Kondik’s departure and the creation of a new LineageOS firmware.

Read about the firmware of CyanogenMod and the skepticism of Steve Kondik in her address in our blog.

Emmigrant from Russia Irina Blok plays a significant role in the history of Android, because her logo is now known to millions of platform users around the world. Irina says that she really felt the influence of her work on herself three times and compares the logo with the child. In addition to Google, Irina has developed a visual image of several companies.

Read about the development process of Android logo and the career path of Irina Blok in our blog.

Today, Jesse Wilson is respected among Android developers as a platform evangelist and author of several important libraries. Wilson started as a developer at Nike, but dreamed about working for Google and made this dream come true at the first opportunity. Canadian by birth, Wilson could not stay in California for a long time and returned to his native city Waterloo. Later, a former colleague on Google offered Wilson to work in Square, a new Jack Dorsey`s startup, and to open the company’s office in Waterloo.

Read about who and what Jesse Wilson is responsible for the super abilities in the Android development in our blog.

The founder of the Android company promised «smarter mobile devices that are more aware of its owner’s location and preferences». And he kept his word

The story of the brilliant native of India, who replaced Andy Rubin and headed for the development of AI